We are delighted to have public lectures by two renown international scholars, organised as part of the Alien Energy research project, on Wednesday 19 October (Stefan Helmreich) and Friday 21 October (Noortje Marres).

Stefen Helmreich
The Water Next Time: Changing Wavescapes in the Anthropocene

Stefan Helmreich is Elting E. Morison Professor of Anthropology at MIT. His book, Alien Ocean: Anthropological Voyages in Microbial Seas (University of California Press, 2009), is a study of marine biologists working in realms usually out of sight and reach: the microscopic world, the deep sea, and oceans outside national sovereignty.

Presentation Abstract
Do ocean waves have a history? The question may sound odd: surely waves are simple facts of nature, matters of the substance of the sea. Waves may have diverse manifestations in marine and maritime lore, a variety of effects on economic and political enterprise, and a range of meanings for fishers, surfers, and swimmers. But as formal and material entities, the standard view might say, they are best known by a science arriving at ever-improving models of oscillation, undulation, and movement. Historians of oceanography have complicated such a view, documenting the changing systems through which scientists and seafarers have known waves. This presentation will go further, looking toward a future in which waves are not only known differently (though new kinds of computer modeling, for example) but also become differently composed material phenomena than once they were. Today’s wave scientists and modelers are predicting that climate change may not only transform the global distribution of significant wave heights, but also may also amplify the frequency of rogue or freak waves, changing the world’s wavescape. Others turn to waves as new sources of energy. This presentation will deliver a history of ocean wave modeling in order to anchor an ethnographic report on how scientists think about whether waves may be transforming — or remade — in synchrony with the political, economic, and social scene of the Anthropocene.

Noortje Marres
What if nothing happens? On street trials as experiments in interpretation

Noortje Marres is an Associate Professor in the Centre for Interdisciplinary Methodologies at the University of Warwick. She was written extensively on intersections between technology, knowledge, engagement, and environments, including sustainable living and climate change.

Presentation Abstract
This lecture will investigate the “street trial” as a device for experimental inquiry into energy worlds. Drawing on previous work on living experiments as multifarious instruments (Murthy 2006; Roberts, 2006; Marres, 2012), I adopt a deliberately broad understanding of what counts as an experiment, and in that spirit discuss a range of different street trials involving so-called intelligent or computationally enhanced cars: a street test of a modified VW diesel car that exposed the workings of the “defeat device” installed on its engine control board; the demonstration of a driverless pod on a public square in a middle-sized UK town; an artistic experiment in the streets of New York involving a modified, remote-controlled miniature jeep. I am interested in the extend to which the publicity genre of the “street trial” is and can be deployed to reconfigure relations between innovation and the public, and whether and how this format is reconfigure-able to serve the ends of critical and creative intervention. I will pay special attention to the role of interpretation in all of this, not only because ‘achieving’ a public or collective interpretation of the problems and promises of computerized vehicles seems a crucial aspect of street trials, but also because I want to know whether the re-configuration of street trials into “experiments in interpretation” is a good objective to pursue, in social research as in public life. 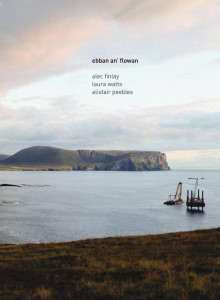 Just launched! Ebban an’ flowan is the world’s first poetic primer on marine renewable energy. The book focuses on the Orkney islands, as the leading international test site for this nascent energy industry, and expands to reflect on its relationship with the Nordic countries across the sea.

Through both language and technology, the book explores how use is inflected with locality. A number of tide and wave energy devices are illustrated, some in dock, others in the sea, along with an anthology of their characterful names–mixing humour with invocations of classical myth and metamorphosis.

Ebban an’ flowan explores the technical and mythic vocabulary which is evolving alongside marine energy devices. The book offers a unique, creative perspective on this social and technical world by gathering together maritime dialect expressions from across the Norse languages, connecting the older lore of the sea with the new lore of ocean energy generation. An innovative range of poems, maxims, and dictionaries connect tide and wave engineers with the older wisdom of mariners, fisherfolk, and mythic selkies or tangies, to suggest how a language of marine energy may, in some imagined future, grow from words, lodged in collective memory.

Languages also have their tides: the energy of speech, as its sound rises and lulls, is always ebban an’ flowan.

The project is inspired by ongoing social research in collaboration with people and places around marine energy in Orkney, conducted as part of the Alien Energy project at the IT University of Copenhagen.

The final report on fieldwork at the European Marine Energy Centre (EMEC) last year, has just been released. This report brings together ideas on ‘care’ (from Puig de la Bellacasa) and ‘dialogic discourse’ (from Bakhtin) to consider to the sociotechnical ‘Invisible Work’ on going in this marine energy test site in Orkney, Scotland, and how this affects the marine energy industry more widely.

It was written by our Research Assistant, Rebecca Ford, who conducted the fieldwork (August-November 2014).

Download and read the Invisible Work at EMEC report.

Our thanks to everyone at EMEC who have so warmly supported this project, and given their time generously to help us with our insights. 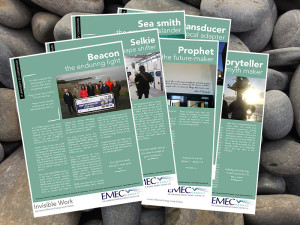 Just launched, is a collection of seven cards that demonstrate the Invisible Work ongoing at the European Marine Energy Centre (EMEC), in the Orkney islands, Scotland, one of the fieldsites for our Alien Energy research project.

Seasmith, Prophet, Transducer, Storyteller, Beacon, Selkie: Each card personifies one service provided by EMEC. Each is a ‘living technology’ of social and technical expertise that makes the test site work, alongside the better-known wave and tide energy infrastructure. This expertise is usually invisible, but is essential to both the test site, and the future of the marine energy industry as a whole.

These cards and their insights were developed by Laura Watts with our Research Assistant in Orkney, Rebecca Ford, as part of a specific collaboration with EMEC during October-December 2014. Thanks to everyone in Orkney who helped us along the way…

part of Energy Futures, IT University of Copenhagen