Resting at a campsite in Mývatn, which lies to the west of the Jökulsá á Fjöllum river canyon that was evacuated yesterday, our (myself and Laura) apprehensive mood has lifted and a more inquisitive tone has set in. Did a volcanic eruption actually occur? In fact what is an eruption anyway, what constitutes it as an event? The media like to portray it with ash, large smoldering clouds that rise up over the horizon and extend into the extremities of our atmosphere, mixing the innards of the earth below with the infinity of space above, although such images are of course interspersed with ashen faced travel industry players and panic stricken airport passengers. Some more intimate scenes also add to the eventfulness of it all, locals packing up homes, tourists, like us, arguing with rangers over our few measly yet worldly belongings, horses and sheep grazing, looking bemused by all the human fuss.

The Icelandic Met office made a decision at 2pm yesterday that the tremor levels at Bárðarbunga (within the Vatnajökull glacier) were sufficient to indicate a small sub glacial eruption somewhere between 100 and 400 meters deep. With ice this thick it might take days for the lava flow to break through the glacier, if at all. The coastguard, with representatives from the civil aviation authority and the police, took a flight over Vatnajökull but reported that there was no indication of pumice or ash erupting through the glacier. A prominent geologist suggested that it was a false alarm, others disagreed.

So an eruption is also about scale, specific indexes (visual indicators of smoke, ash or pumice) and data, lots of data, and different forms, seismographs, aerial photos, web cams all spewing out graphs, charts and interactive data sets. ‘The eruption is happening now’ reads a Reykjavik Grapevine headline, ‘oops not yet’ follows an updated report within five minutes.

In such discourses the eruption is an on or off mode occurrence, it’s either happening or it isn’t, green or red, safe or dangerous. But as we experienced yesterday it can be both happening and not happening at the same time, it isn’t really a discrete event but a continuous fluid set of processes, mobilizations and reactions.

We left Vesturdalur at 2pm yesterday afternoon just as the civil planning authority set its eruption response plan into action. Driving within the beautiful canyon the richness and diversity of the Icelandic landscape is on full display, craggy lava formations of breathtaking color and form are overlain with a rich fertile topsoil as the glacial river carries nutrient rich organisms to the land. This is where pre and post glacial worlds meet.
Thirty minutes into our journey towards Dettifoss (an apparently magnificent waterfall that gathers its water from Vatnajökull) a kindly but authoritative park ranger stops us just short of our destination, ‘the road is closed’, she utters to the bewilderment of myself and Laura. Apparently so is the route back to the area from which we have just traveled. She insists that all cars drive west to Mývatn, but we can’t we grumble, ‘all our gear is back at Vesturdalur’. We argue with her in a slightly worried yet polite manner and she seeks approval for us to return on her radio, while we wonder how serious this really is. ‘Ok, go back and get your gear and Guðrún (another ranger) will meet you on your way, listen to her advise, closely’. 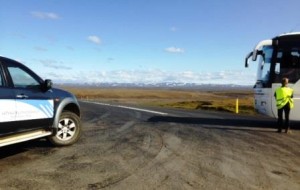 Now we’re nervous, is it a risk to go back, is this a classic tourist dilemma that upon reflection could look like folly. We talk back and forth, imagining that our cool reasoning will intervene in our ever increasing sense of anxiety. If there is an eruption the glacial melt will surely take some time, and this canyon looks vast so no imminent danger, right? But that’s with all things being equal, what if we had car trouble on the way back, this valley is harsh terrain and notoriously difficult to drive in. In this instance we are inhabiting both spaces at once, the eruption both is and isn’t happening. We feel it in our raised anxiety levels, our stressed questions, our growing uncertainty, and our doubt. Our doubt about ourselves, our foreignness to this landscape that we admire so much, yet at the same time are ever increasingly beginning to fear. But more specifically we feel it in our circumscribed ability to act as we wish, in the very materiality of the civil protection infrastructure that has launched into action, mobilizing all manner of people, institutions, devices and technologies.

We give the ranger our phone numbers and subscribe to an emergency response GPS tracker, just in case. We turn back and drive way too fast. Guðrún flags us down about 15 minutes later. Like the last ranger she is friendly yet firm, her voice more sure that a flood is imminent. ‘Drive north, you’ll reach a gate that I’ve closed, pull back the rope and warning sign and drive through it. Pack immediately, continue on to the highway and the police will meet you there’.

We drive on and up to the cordoned off gate, a slight stretch of yellow sticky tape with a small A4 note attached to it awaits us. We laugh, ‘that’s it, that’s emergency response! 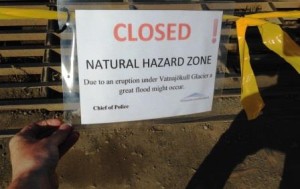 But strangely, unlike being in the eye of a storm, it feels like we are at the periphery of one. In this vast canyon it is two rangers, a car, a radio, yellow sticky tape and an A4 piece of paper that is enacting the eruption; but maybe that’s how events work, rather than being inside them or outside them, rather than occurring or not occurring in some definitive manner, one intersects with a particular version of them at any one moment in time. An event such as an eruption is possibly only a series of interconnected forms of infrastructure, including of course the structures of feelings such as anxiety and displacement that belong to them.
In this way the eruption becomes unbounded, freed from the ontological straight jacket of being or not being. It really does become something in action, possibly forming and unforming amongst a plethora of extensive and intensive collaborations, actions, responses, anxieties, and of course sticky tape and A4 paper.

Arriving back at our campsite, we pack up, talk in a jittery impatient manner to the last of the other tourists that are getting out of Vesturdalur. We found this note stuck to our tent; 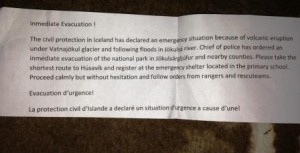 At the turnoff point to Husavik, a small town in the north, we encounter two police personnel, they take our details and chat causally with us. Apparently the whole canyon could flood within eight hours; right now the eruption becomes a denser, more palpable reality.

Today the debate continues, the status has changed to non eruptive activity, despite a 5.2 quake at Bárðarbunga late last night. The sticky tape and precision notes have served their purpose, for now, and we turn out attention back to the 3D Bulge seismograph programs, the webcams, the anxiety inducing international media and the claims laden back and forth of different expert groups as they jockey for definitional and discursive power over the event that has and hasn’t happened.

part of Energy Futures, IT University of Copenhagen